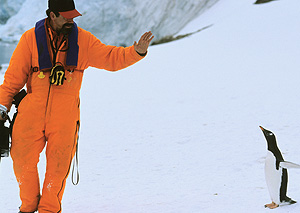 The great explorer, Captain James Cook, sailed around Antarctica over 200 years ago but ice and bad weather prevented him from spotting land. He later wrote that if anyone ever did find the land, that the world wouldn’t gain any benefit from it. Imagine how surprised Captain Cook would have been if he knew that this frozen land had become such an important place to study science, with over 25 countries sending scientists to Antarctica every year. In the summer, over 4,000 people travel to the area to support these projects!

The South Pole in Antarctica is the most southern place in the world. Typically in the United States we think of southern states as being warmer than northern states. For instance, Florida has warmer weather than snowy Michigan. However, Antarctica is extremely cold!

Working as a scientist in Antarctica can be very challenging. Imagine waking up in a tent when it is -20° F outside! Stepping out your tent you would understand why some call it the driest and windiest place on earth. Those working in the area wear layers of clothing and coats called windbreakers. Layers are very important because if you have to walk up a hill, the clothing will cause you to get hot very quickly. But you can remove a few layers of clothing to cool off. If you are sitting, you will become cold very quickly and can put more layers on. Some scientists say they feel like walking snowmen!

Even though the weather can make living there a challenge, it is a special place to study science because the land and air are untouched and unspoiled by pollution. Being a scientist in Antarctica typically requires a bachelor’s degree (4 years) in one of the sciences such as biology, physics, climate, geology or marine biology. Students often travel to Antarctica to get experience before they graduate.

The high elevation and clear skies make it one of the best places for scientists to look deep outer space. Because it is covered with ice and snow it is a great place for scientists to see meteorites, including some from Mars! Biologists visit Antarctica to study how things can survive in the extreme weather conditions.

Ice scientist, Dr. Riedel, explains that every year snow falls in Antarctica, building layer upon layer. This eventually turns to ice. Think of these layers of snow as a pile of newspapers, with the oldest being on the bottom, and the newest newspaper being on the top. There is air trapped between the snowflakes, and when scientists drill down deep into the ice, they are able to get samples of ice and air from thousands of years ago! Studying these samples allows them to learn about what the air was like long ago.

Scientists work in teams to perform their experiments and often become close friends while on their adventures. Antarctica is a very unique place, which is why so many scientists return there every year. If you are interested in becoming an Antarctic Scientist, be sure to bring a journal to keep notes about your experiences --- and pack some hot chocolate mix!

Learn what it is like to be a Scientists living on the Ice – Click the link below to explore the Ice Stories website. Look for the “Meet the Scientists” area on the left side of the webpage. Click the scientist’s name to learn more about what it is like to work in Antarctica. This website which is sponsored by the National Science Foundation includes many pictures and videos which bring the land to life!

Learn more about the History of Antarctica – Take a historical journey through Antarctica by using an interactive timeline. You’ll be able to read stories about Captain Cook and see pictures of the first explorers to reach the South Pole (hint: look for the years 1772 and 1910 to read about these events). This website is sponsored by the British Antarctic Survey and Royal Geographical Society.

Learn more about the Explorers who raced to be the First to Reach the South Pole – Click the links below to read stories, view pictures and watch a short movie filmed in 1911. This information is provided by the National Geographic Society.